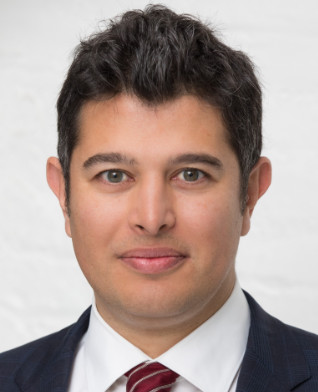 George Farah is a Partner at Handley Farah & Anderson. He develops and litigates cases against powerful corporate interests in pursuit of justice. He has represented a broad array of clients with limited resources—including workers, farmers, consumers, unions, small businesses and whistleblowers—that have been significantly harmed by corporate abuses. On their behalf, he has halted unjust practices and recovered substantial financial damages.

In addition to conceiving and initiating cutting-edge class action cases, Mr. Farah also vigorously litigates them. He has successfully litigated a broad range of important cases around the country:

• Antitrust: He has prosecuted multiple nationwide class actions against large corporations that have violated the antitrust laws. He has successfully represented thousands of individuals and small businesses that were overcharged due to price-fixing conspiracies or unlawful monopolies, recovering hundreds of millions of dollars in damages.

• Wages: He has litigated claims on behalf workers who were unfairly deprived of wages and benefits. In particular, through both class and collective actions, he has represented restaurant, construction and factory workers around the country who were denied minimum wages, overtime pay, lawful benefits or competitive compensation.

• Farmers: He has pursued claims against large food processors that conspired to depress compensation to farmers. For example, in two class actions, he represented thousands of dairy farmers that received artificially depressed prices for raw milk due to unlawful conduct by dairy processors. He helped recover more than $100 million for those farmers.

• Consumers: He has litigated nationwide class actions on behalf of consumers who were deceived about, or overcharged for, a retail product. In particular, he has sued companies for selling defective products, for making false statements in their advertisements about their products, and for failing to honor the promises in their warranties.

• Whistleblowers: He has represented employees that have courageously blown the whistle on corporations that defrauded the federal government. He has specifically represented whistleblowers in cases alleging that healthcare companies and for-profit colleges made misrepresentations to collect millions of dollars in taxpayer funds.

In each of these cases, Mr. Farah aggressively litigated claims against well-resourced defendants for as long as necessary to secure the best recovery for the class. For example, in finally approving a $40 million settlement in Carlin v. Dairy America, Inc. for a class of dairy farmers, after more than a decade of litigation under Mr. Farah’s leadership, the Eastern District of California held that “the Court takes a favorable view of the breadth and depth of experience of Plaintiffs’ Counsel, recognizes the extraordinary efforts they made on behalf of the class, and … finds the settlement amount extraordinary.”

Mr. Farah has also zealously engaged in pro bono litigation to safeguard our democracy and protect human rights. He sued President Trump for violating the Emoluments Clause of the Constitution. He represented Holocaust survivors in actions against companies who profited from Nazi-era slave labor. He obtained political asylum for applicants who were tortured in Nepal. He represented Greenpeace against corporations that spied on and infiltrated the nonprofit. He provided legal counsel to an affordable housing campaign pursued by Tenants and Workers United.

Prior to co-founding Handley Farah & Anderson, Mr. Farah was a partner at the law firm of Cohen Milstein Sellers & Toll, where he focused on antitrust and human rights litigation for 14 years. Since 2016, Mr. Farah has been named a “Super Lawyer” by Super Lawyers magazine.

Before practicing law, Mr. Farah obtained his undergraduate degree in international relations from Princeton University and earned his law degree at Harvard Law School. He was also the recipient of a Paul and Daisy Soros Fellowship.

In addition to litigating, Mr. Farah has advocated for policies to strengthen democracy and address income inequality. He previously founded and directed the nonprofit Open Debates to improve the presidential debate process; served as Treasurer and General Counsel of the Campaign for a Living Wage, which raised wages for low-income public employees; and reported on the harms of media concentration at The Center for the Study of Responsive Law.  He currently serves on the board of The Modern Classrooms Project, which improves education for low-income students, and on the board of the American Independent Business Alliance, which supports locally-owned businesses and the communities in which they operate.

Mr. Farah is the author of the book No Debate: How the Republican and Democratic Parties Secretly Control the Presidential Debates from Seven Stories Press. His articles on legal and electoral issues have appeared in Antitrust Magazine, The Washington Post, The Boston Globe, The Philadelphia Inquirer, Extra! Magazine, The Denver Post and other publications. PBS called Mr. Farah a “remarkable author” who exposed the “secretive process by which party handlers ensure there won’t be a real discussion of the issues” at the presidential debates.

Mr. Farah has appeared on over 50 television programs and hundreds of radio programs to discuss legal and political matters, including “Nightline,” “20/20,” “NOW with Bill Moyers,” “CBS Evening News,” “NBC Nightly News,” “CNN Lou Dobbs Tonight,” “Lester Holt Live,” “FOX and Friends,” and “Countdown.” He has also given several talks about the political process and electoral reform issues at colleges and universities.

He lives in New York City with his wife and two children.

• DairyAmerica Misrepresentation: Mr. Farah serves as lead counsel in Carlin v. Dairy America, Inc. (E.D. Cal.), accusing several dairy processors of conspiring to inflate their profits at the expense of thousands of dairy farmers by misreporting data to the federal government. Lead counsel secured a $40 million settlement for the class.

• OSB Antitrust: Mr. Farah served as co-lead counsel in In re: OSB Antitrust Litigation (E.D. Pa.), alleging that manufacturers of oriented standard board conspired to reduce supply and thereby increase prices. Lead counsel secured a $120 million settlement for the class of purchasers.

• Nexium Antitrust: Mr. Farah served as co-lead counsel in In re: Nexium Antitrust Litigation (D. Ma.), a pay-for-delay lawsuit alleging that AstraZeneca PLC, the brand manufacturer of Nexium, paid rival manufacturers to substantially delay the introduction of generic versions of the drug to the market.

• Emoluments Case Against Trump: Mr. Farah serves as counsel in CREW, et al. v. Trump (S.D.N.Y.), which alleges that President Trump has violated the Emoluments Clause of the Constitution by accepting payments from foreign and domestic governments.

• NYPD Record Searches: Mr. Farah serves as counsel in Belle et al v. The City of New York (S.D. NY), a class action alleging that the New York City Police Department engages in the unconstitutional practice of detaining people to conduct record searches when no reasonable suspicion exists to do so.

• Provost Sugarcane Farm: Mr. Farah serves as counsel in Provost v. First Gauranty Bank (E.D.LA), which alleges that a bank discriminated against an African-American sugarcane farmer in Louisiana by providing loans on inferior terms than those provided to white sugarcane farmers.

• Nepali Nurse Political Asylum: Mr. Farah secured political asylum in the United States for a nurse who had been persecuted and tortured for her religious beliefs in Nepal.